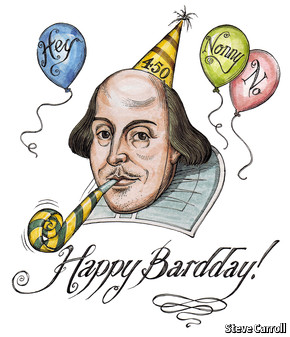 DESPITE the fact that his plays were often performed during the festive period, William Shakespeare has surprisingly little to say on the subject of Christmas. The opening scene of “Love’s Labours Lost” does suggest, however, the importance of specifically seasonal celebration: “At Christmas I no more desire a rose | Than wish a snow in May’s new-fangled mirth”. Similarly, many still enjoy the fires and hearty food of Christmas in colder climates.

Shakespeare will himself be celebrated in the coming year as 2014 marks the 450th anniversary of his birth. Emma Hogan, Britain correspondent for The Economist, rounds up below many of the weird and wacky events being put on for the playwright:

“At the Folger Library in Washington, DC, which holds the world’s largest Shakespeare collection, a first folio of the Bard’s plays will be on show. In Paris a week-long conference will bring together academics, directors and actors in April. Performances will happen alongside readings and exhibitions in museums and in the national library. Britain will hold a “Shakespeare Week” in March. More than 1,000 schools will take part, as will theatres, cinemas and museums.”

Shakespeare will also make his digital mark thanks to a New York theatre company, Shakespeare Exchange. It will publish online videos of each of the writer’s 154 sonnets, performed by 154 actors, in the run-up to April 23rd (the bard’s birthday—famous for also being the day upon which he died in 1616).

As Ms Hogan points out, however, perhaps the best way to observe Shakespeare’s 450th will be to see his plays staged:

“In Britain several productions will compete for attention. In January a performance of “King Lear” at the National Theatre will star Simon Russell Beale, who is also directing the play. In February the team behind “War Horse” will bring a puppet version of “A Midsummer Night’s Dream” to the Barbican.”