By Joshua Keating
89974541-men-make-exercises-at-the-world-summit-against-obesity Men exercise at the World Summit Against Obesity in Mexico City on Aug. 20, 2009. 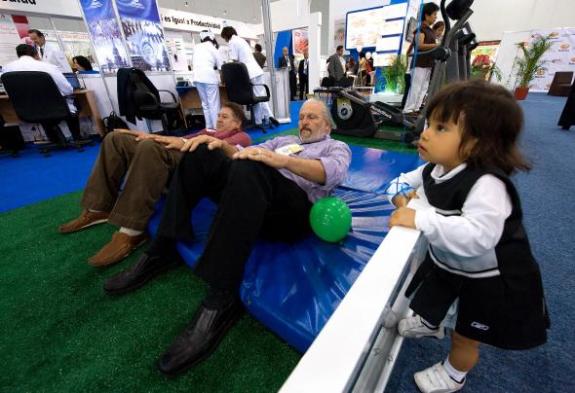 A new report from the Britain-based Overseas Development Group on changing global diets finds that there are now more than twice as many overweight or obese people living in the developing world as in wealthy countries. Overall, the number of affected people in developing countries “more than tripled from around 250 million people in 1980 to 904 million in 2008. By contrast, the number of people who were overweight or obese in high-income countries increased 1.7 times over the same period.”

At first glance, given the 870 million hungry people still living in the world, this might seem like a good problem to have. After all, the trend is one driven largely by the growing middle classes in emerging economies and the availability of cheap food.

But as the report’s co-author Steve Wiggins pointed out to me in a phone interview yesterday, “over the next decades we can expect much higher rates of strokes, heart disease, and some form of cancers, in the developing world. In addition to the individuals suffering illness or premature death, we’ll see economic losses due to them being ill or dying early as well as higher costs and the health service.”

Noncommunicable diseases make up an increasingly large share of the global disease burden. Eighty percent of NCD deaths were in developing countries in 2008, compared with 40 percent in 1980. Some public health advocates have even compared the relative inattention to these diseases in international development circles to the slow realization of the humanitarian impact of AIDS during the 1990s.

While much of the literature on global obesity focus on the homogenization of global diets and the impact of western culture, media, and advertising on how people eat, Wiggins notes that when you look across the emerging economies of the developing world, you can see major differences in diets and rates of obesity and overweight.”

The two extremes are “Mexico, where you’ve got 2 out of every three people are overweight or obese and you’ve got a national epidemic of Type 2 diabetes, and towards the other end of the scale you’ve South Korea with roughly one third the rate of what we’re seeing in Mexico.”

(Of course as Katy Waldman points out today, South Korea has some other rather extreme body shape issues to contend with.)

Overall, Wiggins feels that from a public policy point of view, “Most of this is bad news. Nowhere in the world, including Korea, have we found a country where when you look over the last twenty thirty years, they’ve stemmed the rise in obesity. The prevalence is going up in just about every country.”

Joshua Keating is a staff writer at Slate focusing on international affairs and writes the World blog. Follow him on Twitter.