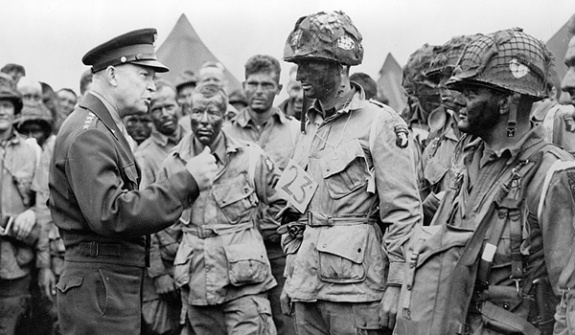 General Eisenhower speaks with paratroopers prior to the invasion. (Library of Congress)

Victor Davis Hanson
Seventy years ago this June 6, the Americans, British, and Canadians stormed the beaches of Normandy in the largest amphibious invasion of Europe since the Persian king Xerxes invaded Greece in 480 B.C.

About 160,000 troops landed on five Normandy beaches and linked up with airborne troops in a masterful display of planning and courage. Within a month, almost a million Allied troops had landed in France and were heading eastward toward the German border. Within eleven months the war with Germany was over.

The western front required the diversion of hundreds of thousands of German troops. It weakened Nazi resistance to the Russians while robbing the Third Reich of its valuable occupied European territory.
The impatient and long-suffering Russians had demanded of their allies a second front commensurate with their own sacrifices. Their Herculean efforts by war’s end would account for two out of every three dead German soldiers — at a cost of 20 million Russian civilian and military casualties.

Yet for all the sacrifices of the Soviet Union, Joseph Stalin was largely responsible for his war with Nazi Germany. In 1939, he signed a foolish non-aggression pact with Hitler that allowed the Nazis to gobble up Western democracies. Hitler’s Panzers were aided by Russians in Poland and overran Western Europe fueled by supplies from the Soviets.

The Western Allies had hardly been idle before D-Day. They had taken North Africa and Sicily from the Germans and Italians. They were bogged down in brutal fighting in Italy. The Western Allies and China fought the Japanese in the Pacific, Burma, and China.

The U.S. and the British Empire fought almost everywhere. They waged a multiform war on and under the seas. They eventually destroyed Japanese and German heavy industry with a costly and controversial strategic-bombing campaign.

The Allies sent friends such as the Russians and Chinese billions of dollars worth of food and war matériel.

In sum, while Russia bore the brunt of the German land army, the Western Allies fought all three Axis powers everywhere else and in every conceivable fashion.

Yet if D-Day was brilliantly planned and executed, the follow-up advance through France in June 1944 was not always so. The Allies seemed to know the texture of every beach in Normandy, but nothing about the thick bocage just a few miles inland from Omaha Beach. The result was that the Americans were bogged down in the French hedgerows for almost seven weeks until late July — suffering about 10 times as many casualties as were lost from the Normandy landings.

So how did the Allies get from the beaches of Normandy to Germany in less than a year? Largely by overwhelming the Wehrmacht with lots of good soldiers and practical war matériel. If German tanks, mines, machine guns, and artillery were superbly crafted, their more utilitarian American counterparts were good enough — and about 10 times as numerous. Mechanically intricate German Tiger and Panther tanks could usually knock out durable American Sherman tanks, but the Americans produced almost 50,000 of the latter, and the Germans fewer than 8,000 of the former.

Over Normandy, British and American fighter aircraft not only were as good as or better than German models but were far more numerous. By mid 1944, Germany had produced almost no four-engine bombers. The British and Americans had built almost 50,000 that by 1944 were systematically leveling German cities.

Winston Churchill and Franklin Roosevelt were far more pragmatic supreme commanders than the increasingly delusional and sick Adolf Hitler. American war planners such as George Marshall, Dwight Eisenhower, and Alan Brooke understood grand strategy better than the more experienced German chief of staff. Allied field generals such as George S. Patton and Bernard Montgomery were comparable to German legends like Gerd von Rundstedt or Erwin Rommel, who were worn out by 1944.

The German soldier was the more disciplined, experienced, armed, and deadly warrior of World War II. But his cause was bad, and by 1944 his enemies were far more numerous and far better supplied. No soldiers fought better on their home soil than did the Russians, and none more resourcefully abroad than the British Tommy and the American G.I., when bolstered by ample air, armor, and artillery support.

Omaha Beach to central Germany was about the same distance as the Russian front to Berlin. But the Western Allies covered the same approximate ground in about a quarter of the time as had the beleaguered Russians.

D-Day ushered in the end of the Third Reich. It was the most brilliantly conducted invasion in military history, and probably no one but a unique generation of British, Canadians, and Americans could have pulled it off.