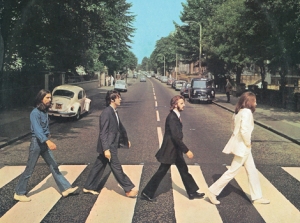 Forty-five years ago today, four young men walked across a zebra crossing in north-west London, the shutter of a camera clicked, and history was made. The cover of the Beatles’ 11th studio album immortalised the Abbey Road crossing—and everything else in the picture, too. (Apparently the number plate of the white VW Beetle parked half on the pavement in the background was repeatedly stolen.)

Paul McCartney, who still lives around the corner, had the idea for the image and sketched it out. The creative director decided not to put the name of the band or the album on the cover—even though EMI wanted it—because “they were the most famous band in the world”. And so, thanks to the contagion of celebrity, it’s now the most famous zebra crossing in the world.

Those of us who live nearby are accustomed to being asked for directions to Abbey Road by strangers outside the tube station. Legions of fans crowd the crossing—especially at this time of year, and no doubt even more today—eager for their chance to get “The Shot”. There is even a “crossing cam”, so you can watch it live online.

If you drive regularly over it, as I do, you soon learn that the rules of the Highway Code are virtually impossible to implement here. You can still “look out for pedestrians waiting to cross” and “be ready to slow down or stop to let them cross”, but however much you may want to “give way when a pedestrian has moved onto a crossing”, they just don’t want you to. They wave you impatiently on, scanning the road beyond for a break in the traffic. The last thing they want is your car in their photo—even my little electric car, which is white and could do a passable imitation of the Beetle behind George Harrison’s head.

What the fans possibly don’t know is that, at 11.35am on August 8th 1969 (also a Friday), a policeman stopped the traffic for the shoot, and the photographer, Iain Macmillan, stood on a stepladder in the middle of the road to get his vantage point. Today, at the same time exactly 45 years on, cast members of “Let It Be” (a Beatles musical) will lead a group of fans across the crossing. There will be a sing-a-long to mark the occasion too.

I knew a French woman who parodied the album cover for her change-of-address card when she moved back to Paris. She hired a photographer and turned her husband and two young children out of bed at 4.30am to get the shot with no vehicles on the road. It worked brilliantly. But on a normal day, once the 21st-century daytime traffic has built up, forget it. Fans will still try, but unless they start very early (jetlag could be a positive here) they will have cars, lorries and double-decker buses in their photos. And local drivers will still find that Abbey Road is the only place in Britain where pedestrians give way to vehicles on a zebra crossing.