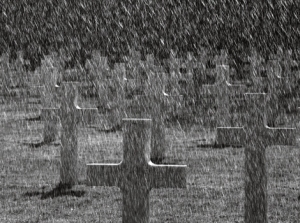 It is 100 years since the first world war broke out. Brian Harris’s photo essay marks the anniversary by capturing the stillness and symbolism of the battlefields. He talks to Simon Willis

One evening last March, Brian Harris stopped his car at the side of the road near Douaumont in north-eastern France and walked into the forest. After about 50 yards he came to a trench winding its way through the trees. He’d been there earlier in the day, but the light had been too sharp, the shadows cast by the trees too deep, and children from a school party had been running up and down the trench, their picnic laid out nearby. But now the light was softer, and the woods were gloomy and quiet. “I wanted to photograph the darkness where that trench went,” he says. “I knew that if you dug down into that ground you would find bits of body. In that forest there are the remains of men. Those roots are feeding off men.”

He was standing on the Verdun battlefield, one of the bloodiest of the first world war, which began 100 years ago this July. During ten months of fighting in 1916, up to 976,000 French and German soldiers were killed or wounded at Verdun. Many of the dead were never found. “To stand in a wood and listen to the quiet,” Harris says, “and realise that 100 years ago, where you’re standing, was carnage—that’s chilling.” The trench he photographed led from Belleville to the front line and the fort at Douaumont. “It was a pathway to death.” His image—haunted, sombre, terrifyingly tranquil—is his elegy.

Although most of the pictures here were taken last winter, they are the result of a 45-year fascination. In 1969, when he was 16 and living in Romford in Essex, Harris went on a school trip to Belgium. “We stayed in Blankenberge, played on the beach, got drunk on Stella Artois. And we went to Tyne Cot cemetery on the battlefields of Passchendaele. None of us had a clue. I was utterly taken by what I saw. I just couldn’t believe that each headstone represented a life.”

Two weeks later, he joined a Fleet Street picture agency as a messenger boy. He went on to become a photographer at the Times and then the chief photographer at the Independent in its early days, when it was bringing a new elegance and soulfulness to newspaper pictures. As well as covering famines, presidential campaigns and the fall of the Berlin Wall—a subject he returned to for Intelligent Life in 2009—Harris’s interest in the war kept taking him back to those battlefields and cemeteries. “I did little stories about the re-carving of headstones, or the burial of bodies.” In 2007 he collaborated with the writer Julie Summers on a book called “Remembered”, a photographic history of the Commonwealth War Graves Commission. “I see myself as a historian with a camera,” he says.

The photographs here are the culmination of this work, and his most personal yet. He chose to travel in February and March, when the forests and fields would be free of undergrowth and crops, the trenches and shell-craters well defined, and the light muted. His picture of a line of trees stretching to the horizon on the Somme would have been impossible to take in the summer, when the trees coalesce in a mass of cheerful greenery. And the form of the photograph—the trees as a bare column heading to the ridge, a dark contrast against the sky—is integral to its power. “As soon as I saw the trees I said, ‘Soldiers going into battle, look at them’. The line of trees follows the route of the advancing British troops. That horizon is the German defence line. Men died in that field, attacking that ridge.”

The placid surfaces of these photographs tremble with this mixture of stark fact and strong feeling. Harris knew the history of his locations, and would then sink into their atmospheres. “I have to honour those who fought and died with my time,” he says. “Sometimes I would walk for an hour in a wood or field before taking a photograph.” His knowledge carried him beyond the obvious. Behind him on the Somme was the stately red-brick memorial at Thiepval, but it was the trees that shook him, none of them more than 95 years old. At the Lochnagar crater at La Boiselle—one of the largest on the Western Front—he was walking the rim when he saw a wreath hanging from a fragile branch, intimate and easily missed. “The crown of thorns. That’s what I felt when I took that picture.”

Looking at his images now, Harris thinks of a painting, “Menin Gate at Midnight” (1927) by William Longstaff. It shows ghosts rising from the ground on the plains outside Ypres. “I think you could superimpose those ghosts onto my pictures. I was photographing a ghost story.”